Dive in Style founder Tim Simond shares some of his thoughts on the Turks and Caicos Islands, a remote Caribbean chain he has visited many times over the past two decades.

Twenty years ago these scraps of low lying scrub were an almost forgotten relic of the British Colonial Empire, indeed the first cars only appeared in these islands a little over 40 years ago; truly, the forgotten Caribbean when I first discovered them longer ago than I care to recall! Since that time there has been an explosion of development, some of it reckless and ill conceived, but there are still remote pockets that host some of the best white sand beaches and azure waters you could hope to find.

Twenty years ago, as you sped across the miles of shallow sandbanks to the best dive sites, French Cay, Sand Bore Channel and West Sand Spit, your boat would cleave through a carpet of eagle rays feasting on the shallow conchs. Needless to say, the conchs are now all fished out and so the eagle rays have retreated to deeper waters but they are still regular visitors.

Grace Bay is home to a legion of excellent resorts, such as the lovely Point Grace, fronting onto a relatively busy but perfect strand of white sand regularly voted amongst the world's top ten, but if you want something more removed from the mainstream then Amanyara has the answer with the local dive boat often picking you up right from the beach. Venture a little further afield and really get away from it all at the Meridian Club on Pine Cay, a 15-minute boat ride from Big Blue, the islands premier dive operation, or if diving is less important, the more distant celeb filled Parrot Cay.

As to the diving, the principle thrill here is wall diving with the reefs dropping away thousands of feet beneath you where you will find green and hawksbill turtles, eagle rays, grey reef sharks, the occasional great hammerhead and even the fast disappearing goliath grouper; over the twenty years I have visited the islands, I have seen them all here. Add in Jo Jo the local friendly dolphin who often seeks out the company of humans, and even the possibility of a passing humpback whale or whale shark and you have some of the best diving in the Caribbean. 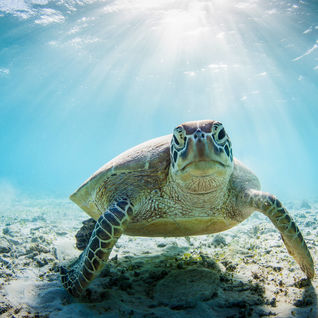 Top 6 Places to Swim and Dive with Turtles

Glimpsing a green, hawksbill, leatherback, loggerhead, Kemp's Ridley, Olive Ridley or flatback on a dive can bring a smile to the face of the most stoical of divers. And while sea turtles can be found in all oceans (except the Arctic) throughout the year, here is our pick of the top spots to…