According to the ancient folklore of tribes in Mozambique (niche, we know), God and his angels had a jolly sojourn to the ocean and were so enamoured by a passing whale shark that they showered it with silver coins forming its distinctive spots, owing to the Swahili name 'papa shillingi' or 'shark covered in shillings'. More commonly, whale sharks are known as the biggest fish in the ocean, with the largest officially recorded (by the chaps at The Guinness Book of Records) measuring 41.5ft and weighing a humungous 21.5 tonnes, which is indeed about the size of a bus. 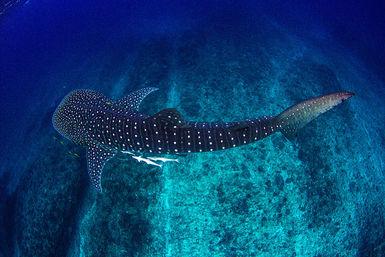 Battle of the Sexes

Females are usually larger than males, especially pregnant whale sharks, which you literally can't miss in the Galapagos Islands between June and November. While we're on the subject of sex, you can distinguish a male by his claspers, a pair of appendages used to grasp the female when mating. No matter what the sex, a whale shark's distinctive stripe and spot pattern is unique to the individual, which has been vital to their conservation (more on that later). 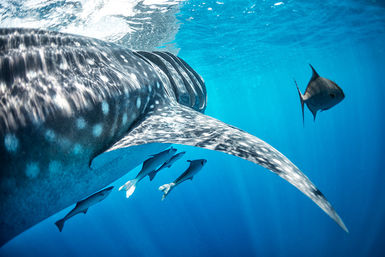 Mysteries of the Deep

Whale sharks are ovoviviparous, meaning that they produce eggs which hatch internally before being born live. However, this was only discovered in 1995 after a pregnant female was caught off the coast of Taiwan - no-one has ever actually witnessed a whale shark give birth. 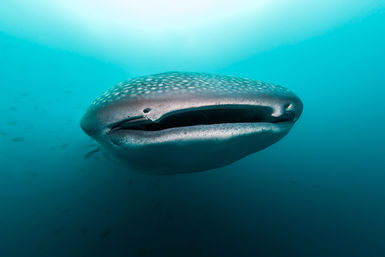 Currently listed as vulnerable to extinction, the main threat to these gentle giants is the growth of unregulated and unsustainable fisheries to supply international trade demands for shark fins, skin, meat and liver oil (which is used to waterproof wooden boats). However, by identifying their unique patterns, scientists are working hard to track and monitor these gentle giants to create population models for international conservation efforts and management. 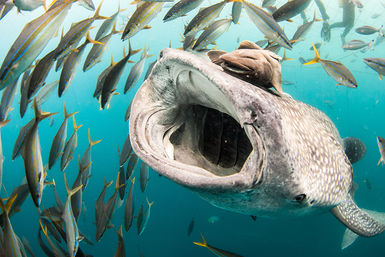 Where to Swim With Whale Sharks

With a preference for warm waters, whale sharks populate every tropical sea but are notoriously difficult to spot unless you choose your spot very carefully. Among other destinations, they are known to migrate every spring to the continental shelf of the central west coast of Australia as the coral spawning of the area's Ningaloo Reef provides the whale shark with an abundant supply of plankton.

"The whale sharks in the Galapagos were the biggest I’ve ever seen. They tend to be seen here during the summer months and 90% appear to be pregnant - though research is still underway to discover why."
Emily Chappell, Original Diving Specialist 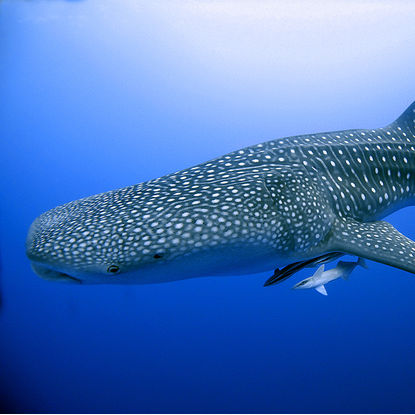 Average lifespan of a whale shark

Of whale sharks survive to adulthood