Enquire Now
Enquire Now
An archipelago of some 500 volcanic islands scattered across the western Pacific Ocean, Palau is home to some of the most stupendous scenery on earth. But, below the water lies an underwater museum of fascinating WWII wrecks offering an eerie insight into the country’s brutal past.

During World War II, Palau was a key focal point of the ferocious battle between the US and Japan. In June 1944, the US launched Operation Forager (or the Mariana and Palau islands Campaign), an offensive to neutralise the Japanese bases in the central Pacific and retake the Philippines. Between June and November, the Americans carried out a series of air strikes, sinking more than 60 Japanese WWII ships across Palau (not to forget the WWII planes shot down and sunk in the process) and eventually claiming victory.

While the Japanese government was able to salvage some of the wrecks during the war, today there is a wealth of fascinating wrecks that scatter the archipelago. We would recommend liveaboard diving in Palau to explore the incredibly varied WWII wrecks, which range from sunken Japanese Zero planes to huge cargo ships, all of which are carpeted in hard and soft corals. These underwater museums house a trove of artefacts, from gun platforms to discarded bullets, providing an eerie insight into the past. A huge abundance of marine life also shelters among the wrecks meaning divers are treated to the best of both worlds, be it schools of jacks and snapper or elusive leopard sharks.

Because of the sheer volume of wrecks, there is something suited to every level of diver. Most of the wrecks lie in shallower depths ideal for Open Water divers, however, there are some wrecks better suited to advanced divers due to their depth and currents.

The best, and only, real way to explore Palau's wrecks is by liveaboard - and while divers are guaranteed to explore an extremely diverse museum of wrecks, here are our top five WWII wrecks to dive in Palau.

Located five miles south of Koror, Iro Maru is a 143-metre wreck sunken during 'Operation Desecrate'. Extending a maximum depth of 40 metres, the wreck sits upright on the seabed, with the aft guns still in place and ammunition scattered across the wreck

Only discovered in 1994, Jake's Seaplane is a spectacularly intact Aichi Navy float plane wreck lying 15 metres deep on a shallow reef patch, and is home to all the best critters, including cuttlefish, nudibranch and octopus

The largest WWII wreck in the whole of Micronesia, the sunken oil tanker extends 159 metres with a beam of 20 metres. Best suited to advanced divers the wreck lies 40 metres deep. Also known as the Black Coral Wreck, she is covered in black coral trees while inside divers can find radio equipment

One of the best-preserved Japanese Zero fighter planes in Palau, the Zeke Fighter's cockpit and instrumentation is still intact and rests at a maximum depth of 17 metres, making it well suited to beginner divers as well as advanced

Accidently stumbled across by divers in 1990, the 58-metre wreck is yet to be formally identified and named, so is called Helmet wreck after the helmets found inside. Lying in a nearly vertical position, the wreck extends to a maximum depth of 35 metres and is rife with ammunition, rifles, gas masks and, of course, helmets 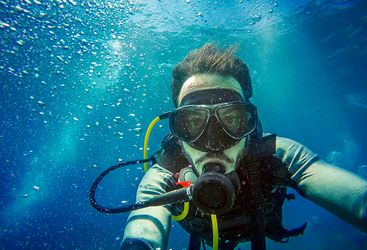 For a land-based trip, the Palau Pacific Resort is most definitely the place to stay here if you want something high quality though it would...
Find out more Add to Ideas+

Jacqui is our 'Wreck Diving Palau' expert and as a seasoned traveller has the inside track on the most memorable adventures.