Diving In A Winter Wonderland

When considering a winter diving trip, exotic sun-draped, far-flung destinations usually spring to mind. And while we're all for a winter sun sojourn, we'd also like to throw another hat into the ring: the surreal, wild wonderland of Iceland. So to put the theory to the test, Louisa and I dusted off our thermals and boarded the plane for the short two hour and 45 minute flight from London Gatwick to Reykjavik as we prepared to dive one of the world's most extraordinary sites…​ 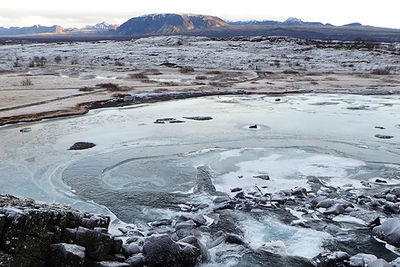 After a leisurely breakfast, we were picked up by our dive guides and headed to Thingvellir National Park which, located in an active volcanic valley just outside of Reykjavik, is a photographer's dream with lava fields, fissures, cliffs and waterfalls by the bucket-load. However, the national park's biggest claim to fame lies in Thingvellier Rift Valley or, as our dive guide Nino called it, no-man's land. The valley is the visible site of the mid-Atlantic Ridge, where the North American and Eurasian tectonic plates meet, housing one of the most unique dive sites in the world: Silfra. 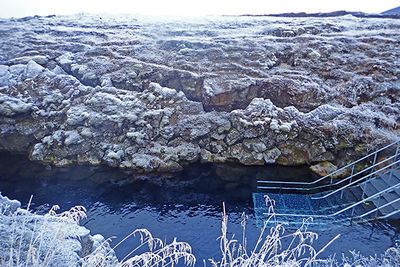 Silfra is a freshwater fissure formed by the divergence of two tectonic plates (at a rate of around two centimetres a year) and is filled with glacial meltwater from the nearby Langjökull glacier. This meltwater has been filtered, over a hundred years, through the underground porous volcanic rock, resulting in water so fresh you can drink it, and whether snorkelling or diving, the site is so clear visibility exceeds 100 metres. 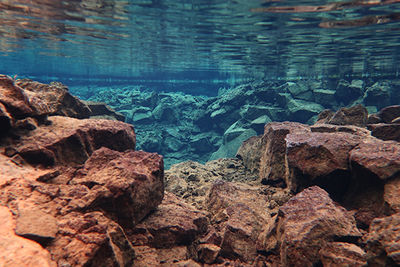 No matter the season, the water temperature stays at around two degrees so you will need a dry suit. Silfra is split into four sections: Silfra Big Crack, Silfra Hall, Silfra Cathedral, and Silfra Lagoon, all of which are explored over two dives during the summer months. But during winter, because the dive gear freezes as soon as it's removed from the water, the four sections are covered during a single dive. But before you start shivering, Silfra benefits from some extraordinary sights only witnessed in the winter months, from water ripples causing beautiful light effects to, if you're lucky, the northern lights. 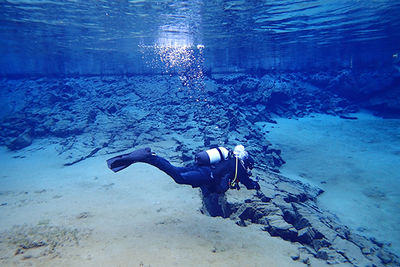 Once we were suited and booted, we walked the 100-metre path down to the site. A thin sliver of water sandwiched by snow-covered plates, the site looks like a scene out of The Chronicles of Narnia. As a self-confessed warm water diver, I was slightly nervous about entering the water, however, I have since been converted to a cold water aficionado. We descended to a maximum depth of 18 metres but spent the majority of the dive in shallower depths as we navigated through the fissure in crystal clear water. If you're a photography fanatic, I recommend doing the dive twice, once so you can appreciate the incredible topography and once so you can get the perfect snaps. 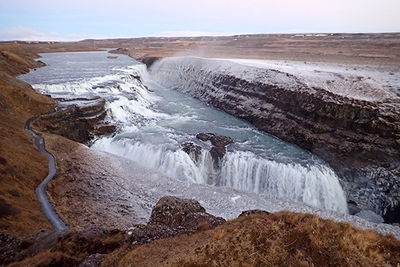 Exiting the water we were greeted with a wonderfully wintery wonderland, with no fear of getting frosty as the dive team were on hand to help us out of our gear. After a steaming mug of hot chocolate we were taken on an adventure across the Golden Circle to the impressive Gullfoss waterfall and exploding Geyser Geothermal area, heading back to Reykjavik as the sun started to set, which at a very early four thirty in the afternoon, means you might be lucky enough to spot the northern lights (although they sadly evaded us). 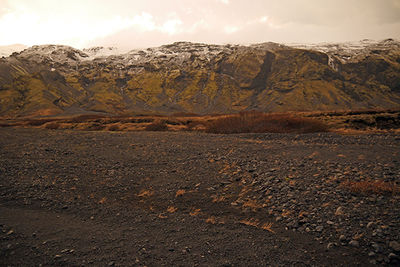 After exploring the Golden Circle, we rented a car and hit the open road down to Vík, stopping at thundering waterfalls, black beaches, snow-covered lava fields and steaming (eggy) hot-springs along the way. As we ventured down the southern coast we chowed down on the best lobster soup in Iceland at Fjorubordid Restaurant, saw electric blue-hued glaciers up close and personal, and took a super jeep tour of the valley of Thor to hike up mountain ridges for some of the most spectacular valley sights I've ever witnessed. Not to forget a dip in the iconic, toasty blue lagoon.

Whether you're looking for a weekend away or a longer adventure, there is so much to explore in Iceland both above and below the water. Iceland, quite simply, is unlike anywhere else in the world.

As the nights draw in, the temperature drops (we had a good run) and businesses start to compete for the best Christmas TV ad (move aside Elton, Waitrose's Stollen takes the crown), the festive season is upon us. So, naturally, we've decided to bypass all of that and look straight ahead to… 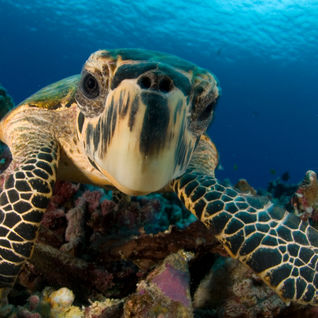 Use It Or Lose It

Time flies, doesn't it? At the beginning of the year there's the resolution-fuelled vigour of dry January and flash-in-the-pan health kicks. Next up is nature's awakening in spring, followed by the rare but welcome heatwaves of summer (this year, anyway). And before you know it there's the…