Who has seen the latest teaser of Blue Planet II? We certainly did, and its given us goosebumps. 20 years after the original series, our favourite naturalist David Attenborough is back and better then ever, taking us deeper than ever before and featuring even more aquatic animals in their natural environment. But why should we limit these spectacles to our screens? It's time to don your huskiest Attenborough voice, dive in and witness the spectacular power of the Blue Planet with our top five destinations for animal encounters. 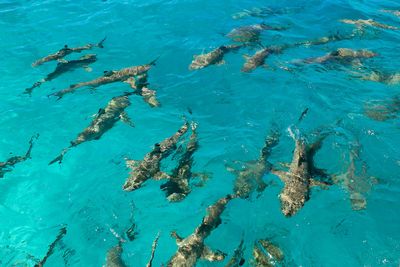 When the shark population outnumbers the human population, you know you're in for a treat. Flanking the island of Rangiroa, Tiputa Pass is a bona fide mecca for sharks: gray, whitetip, blacktip, silvertip - you name it, it's got it. In fact it's not uncommon to see over 100 sharks on a single dive, in crystal clear visibility that often extends to 60m. Tiputa Pass is a drift dive, therefore requires more dive experience, and the best time to visit is between January and February, when you'll also have the chance to see dozens of hammerheads hunting stingrays. But it's not all about sharks, there is a plethora of other world-class dives dotting the area where you'll spot manta rays and dolphins (try rubbing their bellies), as well as huge shoals of fish. Stay Hotel Kia Ora (the only hotel on the island) for a real Robinson Crusoe experience. 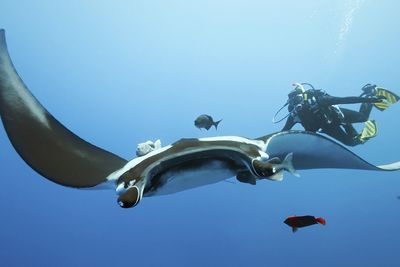 Where Tiputa Pass is a shark's mecca, Yap holds the title for mantas. Year-round, hundreds of these majestic creatures cruise the waters, frequented by divers drifting in the transiting channels. In fact there's so many that the state itself is a Manta Trust field research site, and visitors can embark on expedition trips (it doesn't get more Attenborough then this). Better yet, visit between December and April and you'll spot even greater numbers for their mating season. Stay at Manta Ray Bay Resort & Yap Divers and set out with the Manta Man himself, Bill Ackner, who not only founded the Resort but discovered most of the dive sites in Yap, which, aside from manta rays also include spectacular reefs of soft and hard coral teeming with marine life. 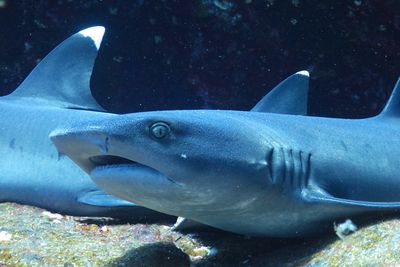 Picture purging bubbles to tickle the bellies of manta rays the size of spaceships. Or drifting above a school of one of the ten species of shark that grace the area. Or perhaps playing with a pod of dolphins. Socorro Island is that and so much more. The archipelago's extraordinary biodiversity is a UNESCO World Heritage Site and a hotspot for marine research, and you can be part of this aboard Nautilus Belle Amie. The ship is luxurious on every level, but what really sets it apart are its crew, who are extremely friendly, passionate and knowledgeable - trust us when we say they'll make your trip truly extraordinary. Visit between January and April and you'll also spot humpback whales, whilst between April and June expect hundreds of hammerheads. 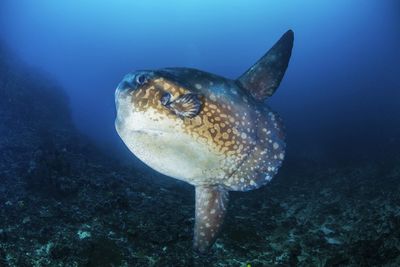 The heaviest of all the bony fish, the ginormous Mola Mola (or Ocean Sunfish) is an intoxicating find for any diver. Eastern Bali is one of the few spots in the world where you are virtually guaranteed a sighting - although only between July and October - and the secluded Alila Manggis has partnered with Zen Dive Bali to set out on the search for these elusive giants. Look out for a fin prodding out of the ocean's surface (no, it's not Jaws), as these round, peculiar fish have a fondness for basking in the sun, or, if you're lucky you'll see one breach the surface (they can jump a staggering 10 feet into the air). But it doesn't end with the Mola Mola, you'll also be treated to a plethora or other marine life, from manta rays to nudibranch. 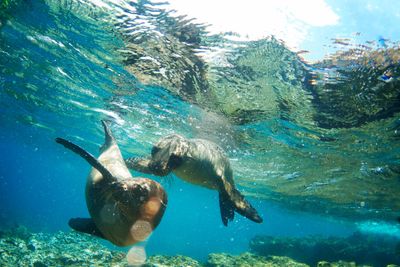 We couldn't make a round-up of the best marine encounters in the world and miss out the Galapagos. Discovered by the original Attenborough, Charles Darwin, in 1835, the Galapagos Archipelago is quite simply the jewel in the crown of marine experiences. Hop aboard the Galapagos Sky and set sail on a two week adventure where you'll spot a staggering 20% of marine life specific to the area, as well as the usual suspects topping any avid diver's bucket list: hammerheads, sea lions, marine iguanas, whale sharks (between July - November), penguins, the list goes on…

So there you have it, our five top dive destinations for wildlife encounters. If you're in the market for some dive encounters of your own, get in touch.