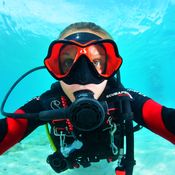 Hammerhead sharks are one of the most recognisable ocean creatures and perhaps the most distinctive of all shark species, largely thanks to their strangely-shaped heads - known as a cephalofoil. Found in the warm waters around Central America, Southern America, Africa, Asia, and Australia, hammerheads live for around 20 to 30 years and can measure anywhere from three to 20ft. They eat small fish, stingrays and octopus (and some species even eat seagrass) and are the kings of the ocean, with no natural predators (other than human intervention), although attacks by orcas, dolphins and other shark species have been recorded. Absorb the ten hammerhead shark facts below to learn more about these amazing creatures and find out why we love hammerhead sharks so much…

1. There are nine species of hammerhead shark in the world 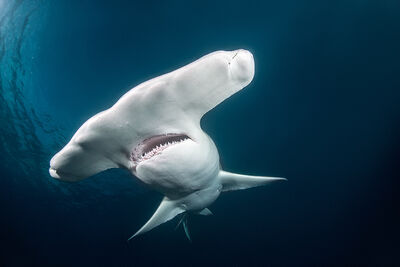 2. The distinctive ‘hammer-head’ part of the shark is called a cephalofoil

The cephalofoil is responsible for the distinctive shape of the hammerhead group and serves many purposes including giving them superior depth perception and binocular vision, aiding hammerheads in navigation and finding food. Scientists also believe that the size of the cephalofoil gives hammerheads a greater number of electroreceptors than in other sharks - increasing their navigational and prey detection abilities

3. Hammerheads can use their heads to aid in hunting

Hammerheads will use their head to ram and pin down prey, tiring them out and making them easier to eat, a true demonstration of the hammer-action! 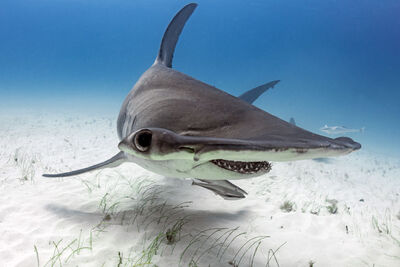 4. Hammerheads have eyes that allow 360 degrees of vision but cannot see in front of them

Hammerheads have incredible vision and depth perception - better than most other species of shark. The position of one eye at each end of their head allows them to see everything around them all the time, giving a complete 360-degree range of vision. This adaption does also come with a caveat that they therefore have a blind spot, right in front of their nose, and divers have observed small fish hiding right in front of a hammerhead's nose!

5. Hammerheads are unaffected by stingray barbs

Stingrays are the number one prey choice for hammerheads, but their barbs are incredibly sharp and the stings have been known to cause nausea and swelling in humans. As a result, hammerheads have had to evolve a tolerance to stingray stings and many hammerheads have even been found with pieces of stingray barb embedded in their skin. 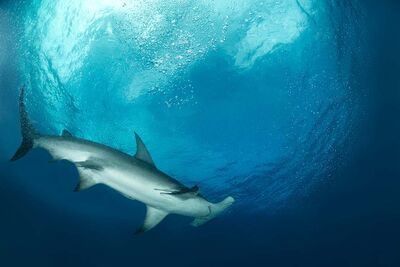 6. Hammerheads are not as old as other shark species

Sharks have been around since the time of the dinosaurs and can be traced back to at least 420 million years ago. Meanwhile, hammerheads have only been around about 20-25 million years; still much longer than humans, but hammerheads are considered a 'newer' evolved shark species compared to the rest.

One of our favourite hammerhead shark facts is that hammerheads love to hang out in shallow waters and as a result, some species have actually developed the ability to tan! Their skin may turn from light grey to dark grey and the best thing about it is they are at no risk of skin cancer. Further study of how they can tan without getting cancer may be critical in uncovering how to prevent and treat melanoma in humans. 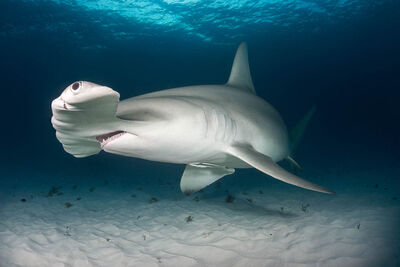 Hammerheads have fins of different lengths compared to other sharks and this impacts how they swim. In most sharks, the pectoral fins are longer that the first dorsal fin, but that is not the case for hammerheads. They often swim at a slight angle because their first dorsal fin is longer than their pectoral fin. By tilting, they're able to use their dorsal fin instead of their smaller pectoral fin, reducing drag and expanding their 'wingspan' which increases swim efficiency.

9. Hammerhead species can exhibit ‘virgin births’ and give birth to live pups

One of the most bizarre hammerhead shark facts is that the females can create offspring by fertilising her own eggs without a male. This is most commonly witnessed in the bonnethead as is called parthenogenesis. Testing has confirmed that no paternal DNA was present in offspring of these species under those experiments.

Baby hammerheads are called pups and a female will be pregnant for eight to ten months before having up to 50 pups at once. The larger the female, the more pups she will have. From the moment they are born there is no parental care and baby hammerheads learn to care for themselves instantly. 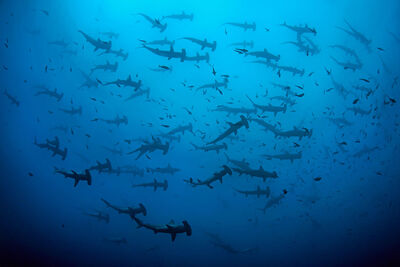 10. Hammerheads love to travel in groups

Destinations like Cocos Island (Costa Rica), Wolf and Darwin in the Galapagos, Ecuador, Rangiroa in French Polynesia and The Bahamas are well-known for divers having amazing encounters with groups of hammerheads. Hammerheads often travel in schools of up to 500 sharks, but only during the day. At night they will often split up into smaller groups or go solo. Why is this? We don't yet know!