This year I turn 30. At the start of the year I decided that it was going to be a big year for me; figure out my five year plan, set some challenges, say 'yes' to as much as possible and go on some unforgettable trips. The five year plan is still a work in progress, however I did say 'yes' to completing a ski marathon so that doubled with a challenge.

On the unforgettable trip front, ever since I can remember, the dream has always been the Galapagos. Although I enjoy pretty much all diving (bar cold water diving), I still have a love of the bigger stuff so the sea lions, penguins, hammerheads, Galapagos sharks and more that reside in the archipelago were it for me. After a little pleading with my product team and explaining I wanted to leave my twenties with a bang, they very kindly agreed. 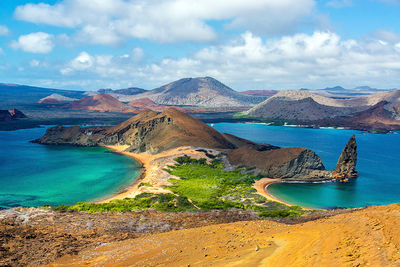 I travelled to Ecuador with KLM which offers the most convenient connections via Amsterdam to both Quito and Guayaquil. The on board experience was excellent with spacious seats and a vast selection of films and television programmes to entertain on the longer leg of the flight. The transfer between the flights is seamless through Schiphol's (Amsterdam) very modern airport allowing for the shorter transfer time. A short internal flight later and I was in the Galapagos, surprisingly spritely and ready to explore. 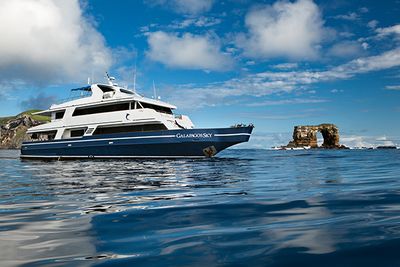 The best way to see the Galapagos is by liveaboard as it's the only way to get up to the very special Wolf and Darwin. Wolf and Darwin are featured on every marine life tv programme so my expectations were beyond high. I was lucky enough to join the Galapagos Sky, the best liveaboard operation in the area. The diving can be challenging with cold water, low visibility and constant changing currents however within a few minutes of stepping on board I felt instantly relaxed about the trip ahead. 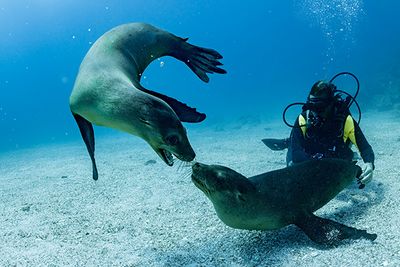 The first dive on board the boat was a 20 minute check dive to test the equipment and to just generally feel comfortable in the water. Fairly mundane stuff. Wrong! Within a few minutes we had some rather friendly guests accompanying us on the dive. Attracted by our bubbles the sea lions twirled, swirled, dived and nibbled on our fins. I was already wowed. 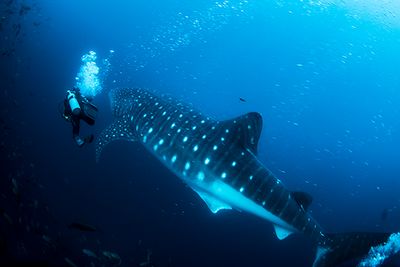 The real highlight though was diving at Darwin arch at a dive site aptly known as the 'the theatre'. After a swift negative entry we dropped down to 20 metres and held on to the rocks tucking ourselves away from the current. We had a cleaning station for hammerheads right in front and we had front row seats. Hundreds of schooling hammerheads swam just metres away, in front and above us turning on their side to be cleaned. It wasn't long before we heard the frantic 'dinging' which meant only one thing... a whale shark. We swam in to the blue to greet her and then from the deep she appeared, all 14 metres of her resembling the size of a bus. 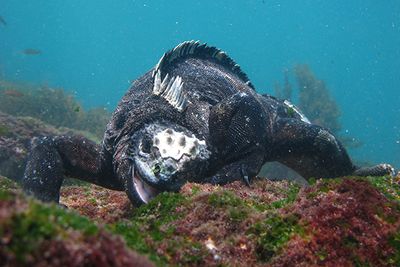 I could say that this was a highlight but there are so many other dives that stood out too, the marine iguana dive was special even though it was frightfully cold. The last dive of the trip was also a favourite with the very cute red lipped batfish that wiggles as it swims. We also hadn't ticked off penguins underwater either however our guide delivered them being playfully chased by sea lions.

I can honestly say that this was a trip of a life time and this is considering I am incredibly spoilt with my diving trips. I was even tearful at the end of my last dive to have experienced everything and it was all over. Although I might not have worked out my five year plan yet, I have decided that in my next life, I want to be a sea lion.