Nudibranchs, sometimes more commonly known as "sea slugs" are some of the hardest creatures to spot on a dive. Although related to snails, these colourful little creatures have ditched the homes they carry on their backs as they have evolved. Similar to land snails, nudibranchs also leave a slime trail, full of chemicals, which can warn other slugs of danger, or be used to find a mate. 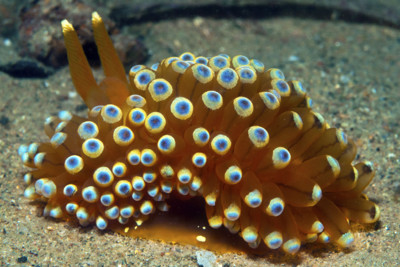 Ranging from 20 to 600mm, it is believed that only half the total number of nudibranch species has been discovered so far, despite this numbering an impressive 3,000 or so to date. The largest nudibranch ever recorded was a 52 cm Spanish Dancer, found in the Red Sea.

Rarely in a hurry, some nudibranchs are solar-powered (or 'photosynthetic' for the more scientifically minded out there), living off the sugars that are produced by the sunlight absorbing algae in their bodies, but all breathe through their gills which form tufts on their backs. In fact, their name is derived from the Greek words "nudus" and "brankhia," meaning "naked gills".

Barely being able to tell between light and dark, nudibranchs use chemical signals instead to locate objects (food and one another) using a pair of 'oral tentacles' which look like horns on their head. If time is of the essence, nudibranchs can release their muscular foot to swim or tumble along in a current, enabling them to cover large distances compared to their size.

Don't be fooled by their sweet appearance, as being soft bodied animals, nudibranchs have come up with some rather impressive modes of self defence to protect themselves from predators. Not only can they be tough-skinned, bumpy and abrasive, some also harbour toxic secretions and stinging cells. Only a few species are capable of making their own poisons, most actually pilfer them from the foods that they eat. Nudibranch species that eat toxic sponges for example, will alter and store the toxins in their bodies and release them from skin cells when they are disturbed.

They have cannibalistic features too, by rearing up like a cobra to engulf their kin (normally a different species.) Despite all of this, it has been known that some humans eat these creatures, although when the experience is likened to "chewing an eraser" it's not high on the list of delicacies I would like to try!

Lacking any physical defence mechanisms and being soft bodied organisms, nudibranchs have become prime candidates for their uses in marine pharmacology and biotechnology (the application of biological knowledge and techniques to develop products or otherwise benefit humans.) Already it is estimated that 24% of marine natural products come from nudibranchs and their relatives, the sea hare, with particular focus at the moment for their uses in anti-cancer drugs.

As hermaphrodites, nudibranchs have both male and female organs. To mate, two nudibranchs come together side by side and exchange sperm sacs through a tube, a process that can last from seconds to a whole day depending on the species. Either way, it is not a romantic affair - they will separate and go their own ways before laying 1 to 6 egg masses in anti-clockwise spirals, some containing up to two million at a time. As most nudibranchs do not live longer than a year, this number of eggs is essential. 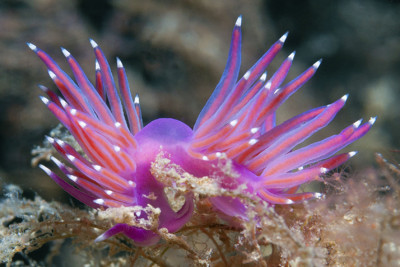 So where can you see these amazing animals?

Thriving in warm and cold waters, and even around sea vents, your chance to see these creatures is high, if you've got the eye for it and can spot them camouflaged that is! From stripes to polka-dots, from bright blue to pink, nudibranchs display a wide variety of colours and patterns. Indonesia, Micronesia and the Philippines are well known for their vast range of nudibranchs; as is Mozambique and Sharm El Sheikh.

They don't bite you, emit a foul odour, sneak up behind you, or otherwise ruin your day. Plus, when you see a variety you haven't seen or recognised before, you may be revealing a new species so make sure you have your camera to hand!

Despite their somewhat simple body forms, it is fair to say that there is more than meets the eye with these creatures, but here at Dive in Style, we love them!