It's fair to say that there has been some confusion surrounding the loosening of the lockdown. We're confident that the Great British public will use their famed common sense to work things out - after all, this is the nation that elevated queuing to an art form - but in the meantime, we've turned to a few of our favourite marine species for inspiration on how to socially distance, and compared them to some species whose behaviour leaves a lot to be desired. In short, be more sole than shoal. 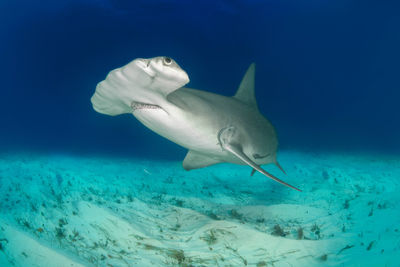 Great hammerheads are a solitary species and migrate long distances (upwards of 800 miles) alone. There are a few spots they can be seen around the world, with one of the very best being Bimini in the Bahamas, in just 8m of crystal clear waters, meaning you can enjoy the experience of seeing these monsters (which can reach as long as 20ft) for longer.

Scalloped hammerheads, on the other hand, can congregate in very large schools of hundreds or more adults. Scientists are still unsure exactly why they do this at certain times of the year (they do 'socially distance' at other times), but if you are lucky enough to witness one of these schools, it is a truly magical experience. Our favourite places to see schooling scalloped hammerheads include the Galapagos, Socorro (Mexico) and Cocos Island (Costa Rica). 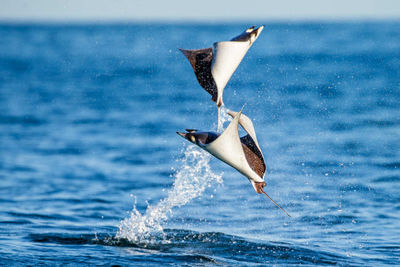 Stat attack: The oceanic manta ray is the largest ray and one of the largest fish in the world. Reaching widths of up to 29 ft, manta rays are much larger than any other ray species and are typically solitary animals, although they do congregate to feed and - obviously - to mate.

Closely related to mantas, mobula rays are an open water species that feed on plankton and other micro-organisms. They have been known to form huge schools - sometimes exceeding 10,000 (not a typo) individuals. See these schools off the coast of Mexico in Southern Baja California (between mid November and January) and in the Sea of Cortez (between mid April and early July). Mobulas are famous for their 'aquabatic' feats and can regularly be seen leaping from the water. 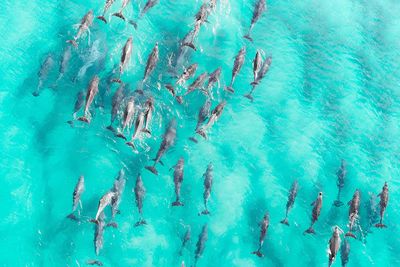 The blue whale is the largest animal ever to have lived, with a maximum recorded weight of 190 tonnes. Apart from females with their young, blue whales are solitary animals that only occasionally gather in groups to feed. They are found in both polar and tropical water worldwide, migrating between the two at different times of year. It is possible to see them off the coast of Sri Lanka between November and April.

At the other end of the cetacean scale, bottlenose dolphins are very social animals, and often travel in groups called pods. The most common is a nursery group of between five and 20 dolphins made up of females and their calves, although occasionally they will gather in groups (with males) of 1,000 or more. They often hunt together and learn different tricks for catching food from one another (such as using sponges to dig up buried prey) in a fascinating example of cultural transmission. Our favourite spot to see bottlenoses also happens to be one of the best dive sites in the world: the Tiputa Pass in Rangiroa, French Polynesia. A resident pod of around 20 regularly comes to visit divers, with three individuals famous for being particularly interactive. 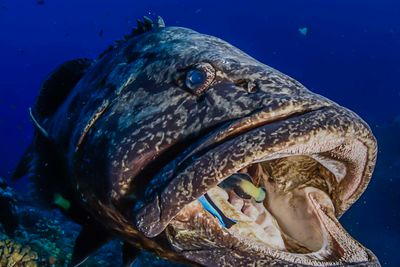 The potato cod is identified by the large, potato-shaped blotches on its body, and is mainly found in tropical waters. It is generally a solitary species and can be found on coral reefs from depths of five to 150 metres. They are also bold and inquisitive, and grow to a maximum length of seven foot and a maximum weight of 220 pounds. The best-known location to see them is the aptly named Cod Hole, located off Lizard Island in the northern part of Australia's Great Barrier Reef.

The barracuda is a large type of predatory fish found in the warmer, coastal regions of the world's oceans. There are more than 20 different species, ranging in size from less than two feet to nearly seven feet in length. While they are considered to be solitary while hunting, young barracudas tend to gather in large schools, sometimes in hundreds or even thousands, which offers the young fish protection from predators on the basis of safety in numbers. Barracudas can be seen in many different locations, but one of our favourites is Bradford Shoals seamount in Kimbe Bay, Papua New Guinea, where there is a resident school of around 1,000 barracudas that form the most spectacular torpedo-like school in 40m visibility. 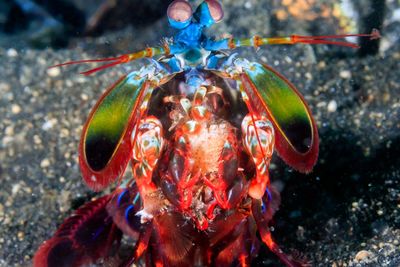 Peacock mantis shrimps might as well be called anti-social shrimps. They are famous for their attacking 'punch' - the strongest in the animal kingdom relative to the creature's weight - which disables prey and acts as a pretty potent social distancing measure. They can be highly territorial and have developed complex social behaviour to defend their space from rivals without the risk of punching or being punched.

Meanwhile, pistol shrimps are inveterate burrowers and are constantly maintaining and creating new burrows in coral reefs and mangroves. They enjoy a symbiotic relationship with the goby fish that share their burrows in a phenomenon known as 'mutualism'. Pistol shrimps have very poor eyesight and so aren't able to see predators until it's too late, so the goby fish stands guard outside the burrow watching for potential threats while the shrimp continues to dig. Because of their poor eyesight, the shrimps touch the gobies with their antennae to communicate. This pair can be found across the Indo-Pacific region.