Alex Marchais, Original Diving intern extraordinaire (he is French after all) recounts one of the dives of his life, the Yongala wreck in Australia.

As an instructor it's hard to think of your favourite dives, as you need to stay focused on your divers rather than what is all around you. However, a few of them remain special to me, such as the wreck dive SS Yongala near Townsville, Australia. For wreck diving fans this is a must dive.

Australia was one of my first adventures abroad with a few missions that I wanted to complete: to spend my birthday on Wineglass Bay, Tasmania - tick; to meet Aboriginal Australians - tick; to dive on the Great Barrier Reef - I was nearly there…

I booked a three day liveaboard with the money that I had left which was disappearing faster than a digestive in a hot mug of tea. Before that day, I had never heard of the SS Yongala so it was a total shock (in a good way) when I saw what lay below.

Let's start with the ship itself which sunk in March 1911 when caught in a storm. A passenger steam ship of 350ft, resting to starboard, between 52ft - 100ft deep, the Yongala shipwreck lies on a sandy bottom, making it a perfect artificial reef hosting an incredible quantity and variety of marine life.

The wreck on its own makes a memorable dive but there is also the life that has taken over the entire boat during the past century, including a vast amount of colourful soft corals and whip corals all over the place bringing the vessel to life as the ocean moves.

What makes a dive stand out from others is not just what you see but what you experience, and what I experienced that day was very special. Here I was spending the entire dive, legs crossed, fins in my hands, being pushed by a gentle current in the exact direction that the boat was facing. I was simply controlling my breath to adjust my depth, looking at the mesmerising picture I was part of, with Queensland groupers of more than 2m, a few bull sharks, sea snakes, turtles, eagle rays with babies flying beneath their mums' wings, school of barracudas and, towards the end of the dive, dolphins to make it even more memorable. This is wreck diving at its very best.

The sinking of the SS Yongala was a tragedy. Ironically, the Aboriginal meaning for Yongala is 'Good Water' which is precisely where the vessel has come to rest. 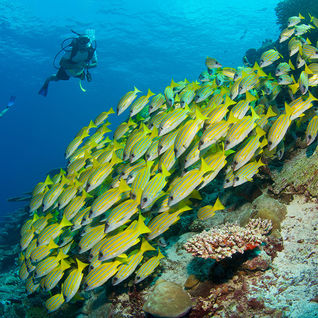 Fish: they come in a kaleidoscope of colours and sizes, and whether alone or in a shimmering shoal dancing over reefs they're a delight to see on any dive, but are also essential to a healthy ocean. However, around 90% of global fish stocks are currently over-exploited, a problem Blue Marine…