It's nearly that time of year again, the last hurdle for commercialised companies before we're bombarded with miles of tinsel, advent calendars and Mariah Carey on repeat. As shops burst at the seams with Halloween tack, this year we invite you to forget trick or treaters, terrible costumes and questionably carved pumpkins and slip beneath the surface… grab your cavity-inducing treats and read on for the most devilish dive sites around the world. 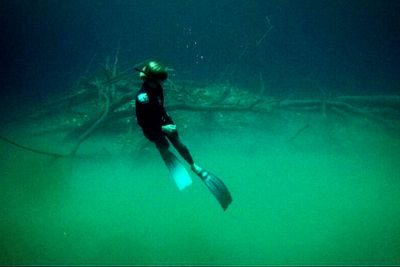 One minute you're basking in the sun, next minute you're in a Tim Burton movie. Located in the Yucatán Peninsula Descending into Cenote Angelita feels like you're entering another dimension as the glittering turquoise surface fades into an eerie green. At 30 metres you'll reach a swirling river of mist, the result of fresh and saltwater mixing, creating a halocline around three metres deep. But what makes this site super creepy is the island of jagged tree trunks poking out from the mist - the remnants of the cave's collapsed roof. Descend through the halocline and switch on your flashlight as you enter total darkness, which will reveal stalagmites and swim throughs along the walls. 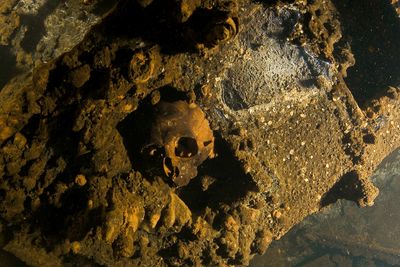 Picture gliding above the ghostly graveyard of a war site. The result of a fatal attack by the US in World War II, Chuuk Lagoon is home to an entire sunken Japanese fleet frozen in time and hands down the best wreck diving in the world. Hop aboard The Odyssey and explore a living part of history as you circle fighter planes, jeeps and tanks, all littered with bullets, gas masks and bones, a haunting reminder of the lives lost. The wrecks are encrusted in hard and soft corals that support a plethora of marine life - it's not unusual to see sharks slinking through these unnerving structures. 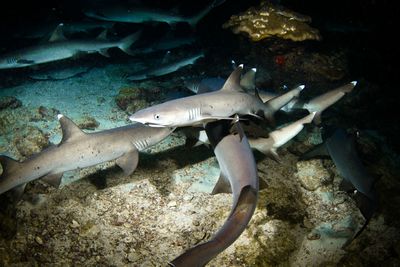 It's pitch black, you're weightless and the only noise is the foreboding, gentle lapping of waves. Flashing your torch around into the dark open ocean feels like you're in space, that is until you catch a flash of grey. Wave your torch around wildly and you'll find a silky shark lurking below, soon to be joined by another. And another. In fact, you can spot a plethora of these silent predators whilst night snorkelling from Nautilus Belle Amie. But don't worry, these misunderstood marines (thanks, Jaws) only feast on fish, octopus and squid - and are a true pleasure to watch. 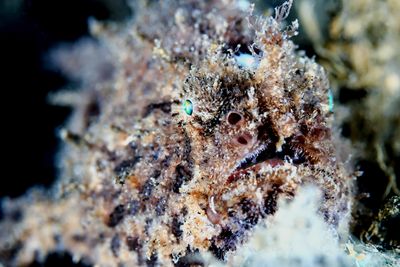 Muck diving is like landing in a post-apocalyptic world. These eerie wastelands are characterised by a black, silty floor barren bar the occasional dead coral skeleton, discarded fishing gear and other detritus. However, these mucky sea beds are rich in nutrients that support a plethora of weird and wonderful critters you wouldn't spot elsewhere. Head to Lembeh Strait, muck diving capital of the world, and search for the vibrant, but deadly, blue ringed octopus, ghost pipefish and hairy frogfish, not to mention a plethora of wacky nudibranch. 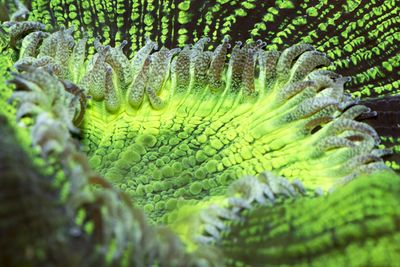 It might be the most terrifying situation of all: picture being thrown into a mosh pit of glowstick-wielding hormonal youths at a UV party…don't worry, we'd never suggest anything so chilling. Take out the teenagers and terrible tunes and be stunned by technicolour reefs glowing in the night. Set out at dusk from the shores of Nuarro Luxury Eco Lodge to witness the underwater world in a different light (literally) fluorescent diving (or UV diving). Armed with a UV flashlight, hover over corals and critters that radiate highlighter shades of green, purple and red, reminiscent of an alien planet (think: Avatar).