Every Tom, Dick and Harry interested in the ocean knows that a whale shark is not in fact a whale, but is the world's largest fish. We bet you also know that the spots on a whale shark are as unique as a human fingerprint. If you're a whale shark novice and both of these facts are news to you, or you're looking to increase your whale shark repertoire, prepare to impress with these ten lesser-known whale shark facts…

The Origin of a Confusing Name

First discovered in 1828 in Table Bay, South Africa, these docile giants owe their name to their monumental size - akin to a whale. However, despite their size and similarity to whales - both baleen whales and whale sharks are filter feeders - they are classified as a shark because they have cartilage instead of bone and breathe via gills. They have also been known by the more unusual Swahili name 'papa shillingi', or 'shark covered in shillings', find out why here. 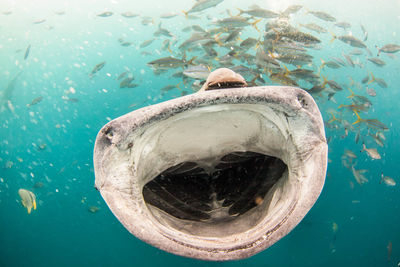 Home is Where the Mouth Is

Whale Sharks Have Teeth on Their Eyes

It's been long-known that whale sharks have tiny denticles - or teeth - covering their skin as a protective armour. However, Japanese scientists have recently discovered that whale sharks also have 2,900 teeth covering each protruding eye. Plus, they're the only shark to have this - making them all the more unique. 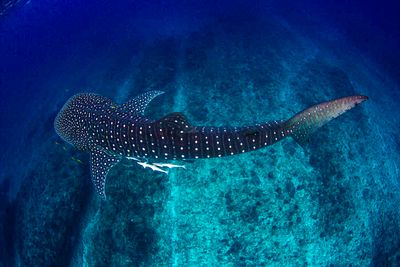 Like the rings of a tree, you can determine the age of a whale shark by counting its vertebrae. This was only discovered due to Cold War nuclear bomb tests in the 50's and 60's (stick with us). Scientists were able to measure lingering radioactivity in whale sharks' vertebrae and concluded that they grow a new vertebrae each year. The oldest whale shark ever recorded reached 50 years of age.

Every round-up of whale shark facts will conclude that these gentle giants are filter feeders that can process up to 6,000 litres of water per hour for plankton and krill. However, they also have a penchant for fish eggs, and have been known to wait for over 14 hours for fish to spawn before swooping in to devour their eggs.

Whale Sharks Have Festivals Too

From Australia's Ningaloo Reef to the Belize Barrier Reef, whale sharks are known to aggregate in certain areas of the world to feed. The largest whale shark aggregation ever recorded - in 2009 - observed 420 whale sharks in an 18 square kilometre patch of ocean in the Yucatán Peninsula in Mexico. They were feeding on (you guessed it) freshly spawned fish eggs.

Their Breeding Remains a Mystery

Scientists have yet to determine how, when and where whale sharks breed. However, two separate eyewitness accounts described seeing a male splashing on the ocean's surface before clasping beneath a female, giving a glimpse into possible whale shark mating rituals. 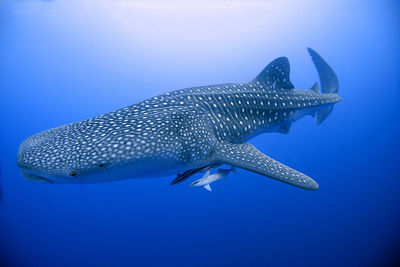 No-One Has Ever Seen A Whale Shark Give Birth

We know that they are ovoviviparous - meaning that they produce eggs which hatch internally - and give birth to around 300 live pups. But this was only discovered in 1995 after a pregnant female was caught in Taiwan, and has never been witnessed.

Humans are a Major Threat

Despite being extremely docile creatures, whale sharks are threatened to near extinction due to human activity. Unfortunately, these species are still hunted for their cartilage, skin, meat and fins - which can reach up to £16,000 in Asia. 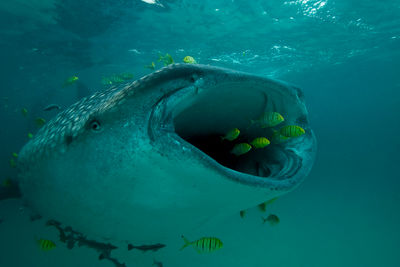 Next time you are on a diving holiday, you can help protect this threatened species by taking photos of whale shark sightings and uploading them to Wildcard. Wildcard is a community platform where individuals can upload photos and sighting information, which helps inform global conservation strategies. Whale sharks are notoriously elusive, but we know the most reliable places to see them. Think: Wolf and Darwin in the north of the Galapagos, Ningaloo Reef in Western Australia - but only during the coral spawning - and Mafia Island off Tanzania, to name but a few.

Been inspired by our whale shark facts? Get in touch with one of our diving experts and start planning your next diving adventure to spot (and snap) whale sharks.